Governance at a Glance

Chair
Member
Chairman of the Board Financial Expert

This committee selects and retains the independent auditors for the annual audit of the Company's consolidated financial statements. The committee also reviews the independent auditors' audit strategy and plan, scope, fees, audit results, performance, independence and approves audit fees and non-audit services provided by, and fees paid to, the independent auditors; internal audit reports on the adequacy of internal controls; the Company's ethics program; status of significant legal matters; the scope of the internal auditors' plans and budget and results of their audits; and the effectiveness of the Company's program for correcting audit findings. The committee also participates in the certification process relating to the filing of certain periodic reports pursuant to the Securities Exchange Act of 1934, as amended.

This committee considers matters of corporate governance and reviews developments in the governance area as they affect relations between the Company and its stockholders. It also develops and recommends to the Board corporate governance principles and practices for the Company, makes recommendations to the Board with respect to the size, composition, organization, responsibilities and functions of the Board and its directors, the qualifications of directors, candidates for election as directors and the compensation of directors. The committee also makes recommendations to the Board regarding annual independence determinations and the annual performance self-assessment of the Board.

This committee reviews and administers the Company's annual and long-term incentive compensation plans, makes recommendations in areas concerning personnel relations, and takes action with respect to the compensation of Company senior executive officers including the CEO. The committee also performs periodic reviews of succession plans for key Company executives, including the CEO. The committee reviews the annual financial condition and investment performance results of the Company's retirement and welfare plans, including the annual actuarial valuation reports applicable to such plans. It is also the committee that oversees the administration and operation of certain of the Company's retirement and welfare plans.

This committee is responsible for reviewing the Company's financial policies, strategies and capital structure. 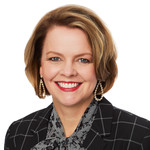 Jill Soltau is Chief Executive Officer of J. C. Penney Company, Inc. Soltau joined the Company as CEO and became a member of the Board of Directors in October 2018. One of the nation’s largest apparel and home retailers, JCPenney employs more than 98,000 associates globally and operates over 860 stores and logistics facilities across the U.S. and Puerto Rico, generating $12.5 billion in annual sales revenue.

Soltau has 30 years of experience in the retail industry, previously serving as President and CEO of JOANN Stores, a specialty retailer that offers fabrics and crafting supplies in over 850 stores in 49 states. A highly accomplished retail merchant and former general merchandise manager, she was brought to JOANN Stores in 2015, charged with reinvigorating the brand and bolstering its market position through a consumer-centric approach that offered compelling assortments, helpful advice and memorable experiences to be digitally shared with others. Under her leadership, the company revitalized its branding, expanded its digital and omnichannel capabilities and forged strategic partnerships to build meaningful relationships with its customers.

Prior to her role at JOANN Stores, Soltau spent eight years at Shopko, leading the company as President after serving as Executive Vice President and Chief Merchandising Officer. She joined Shopko Stores in 2007 and earned various executive positions of increasing responsibility including Senior Vice President and General Merchandise Manager over apparel and accessories. Prior to her tenure at Shopko, Soltau held several senior level positions in merchandising, planning and private brand management at Sears and Kohl’s, after starting her career with Carson Pirie Scott, which was later acquired by Saks Inc.

She was honored with the Medical Mutual Pillar Award for Community Service in 2017, recognizing her efforts to assist communities in need of assistance in the areas of education, health and support for service members and their families. A Girl Scout alumna, Soltau is passionate about fostering innovation and growth among future generations of female leaders. She is also a member of 4-H Luminaries, a distinguished alumni group that helps raise awareness and generate support for life-changing 4 H programs.

Business Experience: Retired Chief Executive Officer of Payless ShoeSource, Inc. from 2012 to 2017; President, Chairman and Chief Executive Officer from 2009 to 2012, and President and Chief Merchandising Officer from 2007 to 2009, of Shopko Stores, Inc.; Vice President and General Merchandise Manager, Sears Roebuck and Co., from 2004 to 2005 and Senior Vice President, Merchandising of Kohl’s Corporation from 1997 to 2004. From 1986 to 1997, Mr. Jones served in positions of increasing responsibility with May Department Stores Company.

Business Experience: Retired Senior Vice President, Chief Financial Officer and Chief Administrative Officer (2008 to 2014) of Campbell Soup Company; Executive Vice President and Chief Financial Officer of Delhaize Group (grocery retailer) from 2001 to 2008; served in various positions of increasing importance with The Coca-Cola Company (beverages) and its bottlers from 1981 to 2001; Director of Pall Corporation from 2011 to 2015; Director of Dean Foods Company; Director of AptarGroup, Inc.; Trustee of Washington and Lee University.

Business Experience: Chairman of the Board of Soave Enterprises, LLC (diversified management and investment company) and President of Soave Real Estate Group from 2016 to 2017; Retired Vice Chairman and Chief Financial Officer (2005 to 2016) of Taubman Centers, Inc. (real estate investment trust), where she held various positions since 1997, including Director from 1997 to 2016 and Executive Vice President and Chief Financial and Administrative Officer from 1997 to 2005; Vice President of Goldman, Sachs & Co. (finance) from 1996 to 1997, where she held various positions between 1986 and 1996; Director of Masco Corporation and Rockwell Automation, Inc.; Trustee of Munder Series Trust and Munder Series Trust, II from 2005 to 2014.

Business Experience: Principal, Plunkett Associates LLC (cybersecurity consulting) since 2016; Senior Fellow, Harvard University since July 2017; Adjunct Professor, University of Maryland College Graduate School since 2014; Senior Advisor to the Director of the United States National Security Agency (NSA) from 2014 to 2016, with which she served in positions of increasing importance since 1984, including Director, Information Assurance Directorate, from 2010 to 2014, Deputy Director of Information Assurance from 2008 to 2010, and in various senior executive, supervisory and analytic roles from 1984 to 2008; Director, Office of Transnational Threats, United States National Security Council at the United States White House from 2000 to 2001.

Experience: Partner of Spectron Desarrollo, SC (investment management and consulting) since 2007; Chairman of Alta Growth Capital (private equity) since 2012; Retired Vice Chairman (2004 to 2007) of Colgate-Palmolive Company (consumer products), with which he served in positions of increasing importance since 1971, including as Executive Vice President responsible for Asia, Central Europe, Africa and Hill's Pet Nutrition, Vice President of Body Care in Global Business Development in New York, President and General Manager of Colgate-Mexico, President of Colgate-Europe, and Chief Growth Officer responsible for the company's growth functions; Director of Starbucks Corporation; Director of Nielsen Holdings.

Meet our Board of Directors and view their bios

View Board of Directors

Guidelines, Charters, and other Governance-related documents